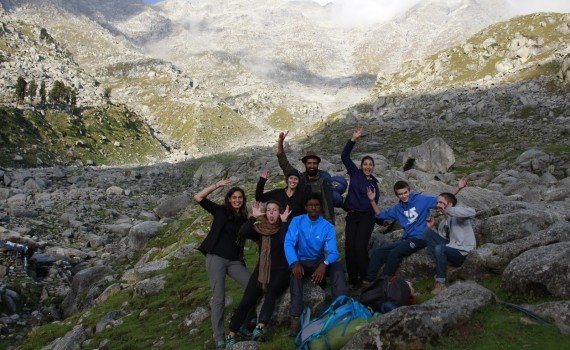 I have a tradition of sipping a freshly brewed coffee on the brisk mornings of a hike to take in the sun rising over the beautiful view in front of me. However, after a cold and unexpected trek to Indrahar pass with Mr. B, Rachael, Daikin, Jakob and fellow interns, all I needed to wake and warm me up in the morning was a hot, spicy chai.

It all started with a call from B early on a Thursday morning asking to join him on an overnight trip to Triund, a popular hike among travellers, to survey the trees at different elevations. I had already been to see the unobstructed view of the Dhauladhar mountain range, but going again with B offered a chance to learn more about the flora and government forest management initiatives. So I rounded up a crew- Louise as my forestry team mate as well as Daniela and Kevin and we were off.

We started through the Deodar predominant forest area in Upper Naddi. The morning sun shone through the dark green needles providing us with some serenity before our gruelling trek; it’s no wonder deodar forests are sacred place of meditation in Hinduism.

Ascending from there brought us to a dense Rhododendron forest on either side of the path, which was unchanging for the better half of the trek. Even without their flowers, which bloom in March/April, it made for a pretty sight. This area is also sprinkled with Himalayan Oak trees, which have been severely lopped by the locals. Lopping is the act of cutting off branches of the tree to provide fuel for families and fodder for livestock to the point where the tree’s shape resembles that of a toothpick. Lopping hinders the regeneration of the tree’s population in a region and has adverse effects on the tree’s overall health. Unfortunately, this practice is not uncommon- you would be hard-pressed to find a healthy Oak in the region. 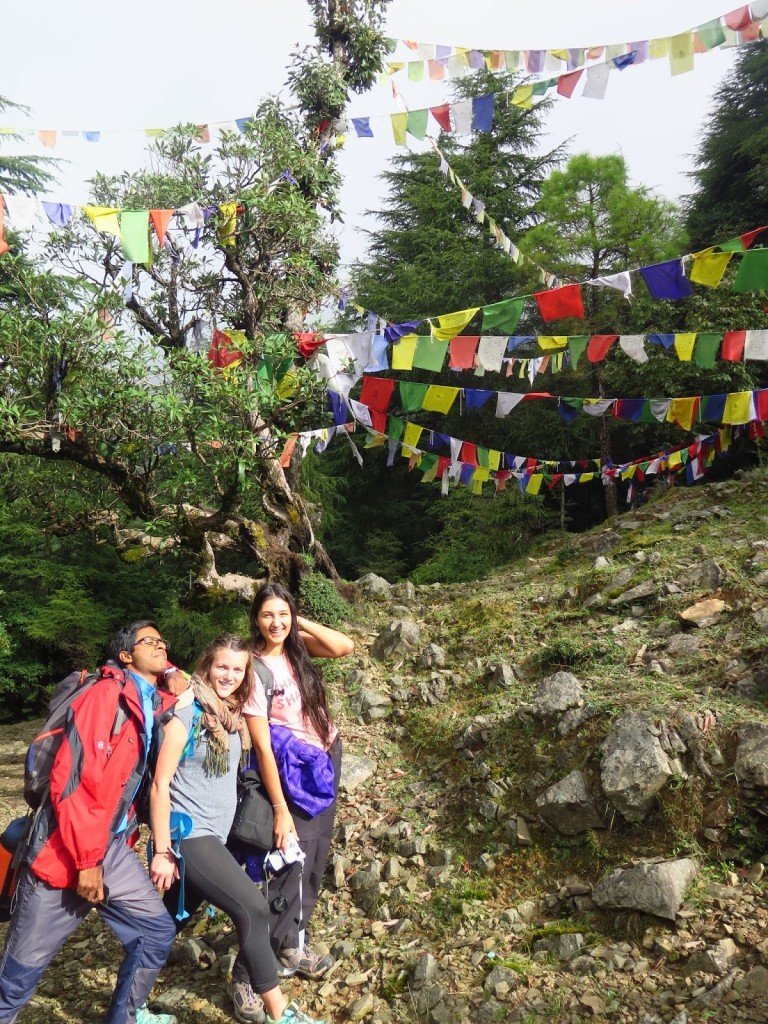 Kevin, Sydney and Daniela on the way to Triund

The foliage gradually became less dense as we neared our destination and the thick Rhododendron forests transitioned into scattered Kriew trees, also known locally as Triund Oak, which are a type of Himalayan Oak. These trees can establish their roots in the steepest and rockiest of slopes. Unlike their sister species, these trees seemed to be in better shape, however they are largely exploited for cattle fodder (local people send their livestock up the mountain for prime grazing during the monsoon season, before winter).

And alas, we reached Triund for a lunch of Thali and a refill of water. Clouds were blocking our promised view of the mountains, but luckily this was not the end of our trip. We were to set up camp for the night in a cave about an hour and a half’s walk from Triund on the base of the mountain. We set out for our last lag of the journey, energy restored and excited to have made it up the toughest bit of the hike- so we thought. 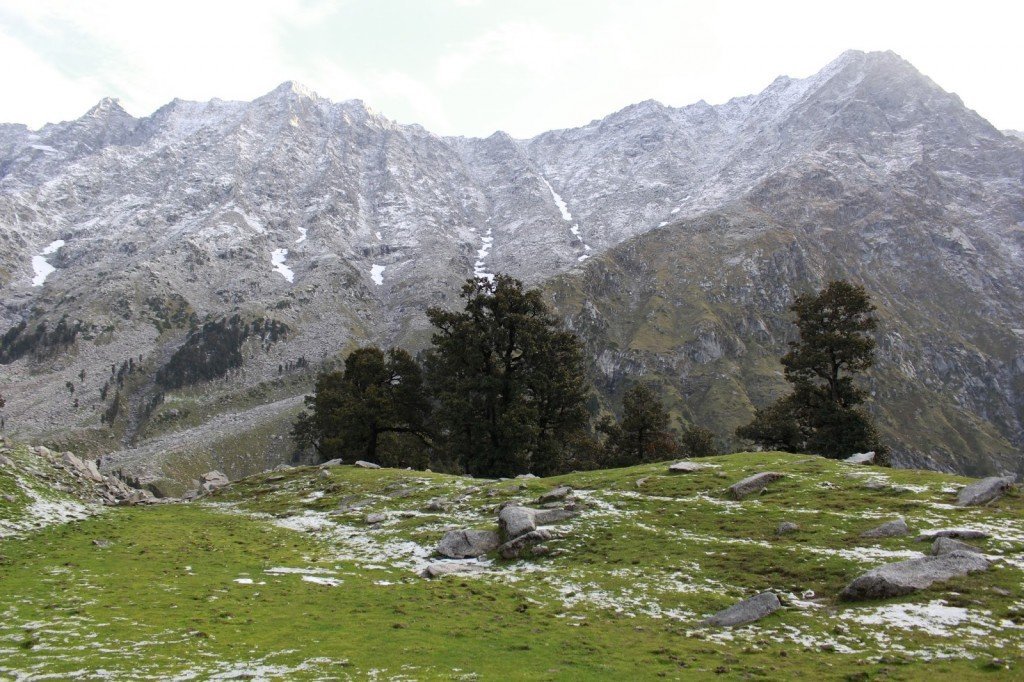 Cold from the frigid cave floor, we set the pass the next morning with promising clear skies. Only a 3 hour ascent and we would reach the peak of the monstrous rock! We stopped every couple hundred meters to catch our breath and a glimpse of Naddi from afar. Snacking on whatever food we had in our backpacks and water from the adjacent glacier, we hiked slowly but surely on the faintly marked path.

The dream was dampened once fog surrounded us and the path to the top was no longer visible. It had been three hours since we started for the day; some of us found ourselves questioning our motives, while others were strictly determined to reach the pass. A group huddle resulted in a decision of completing the journey and off we went again without hesitation.

An hour and a half later of a steep, narrow path and we finally reached the peak! Satisfaction overcame us as we high fived and hugged each other with congratulations. The view of Chamba Valley was worth every heavy breath and finally the mystery of what was beyond the towering mountains we see from Naddi had been uncovered. We knew it was our queue to descend when a blizzard obstructed our view and covered the path, adding another degree of difficulty to the trek.

The blizzard, accompanied by thunder and lightning, followed us down the mountain, forcing us to seek refuge under overhanging rocks when it became too dangerous to continue. The sun made a short appearance, just enough to warm us up and gain feeling in our fingers and toes, however it quickly retreated back in to the clouds. With wet equipment and a dwindling food supply, there was no choice but to make it to Snow Line. We trekked through the blizzards for the rest of the day into dusk with the promise of a warm cafe to keep us going.

We reached Snow Line and sat down among other hikers who did not brave the trek we just completed. We recounted all that we had done over our hot Maggi and omelettes: you know you have a good crew when all the stories told are done so with giant smiles. We set up our tents once we could phathom stepping into the snow, ready to start the next day’s descent with a hot chai and our favourite view. 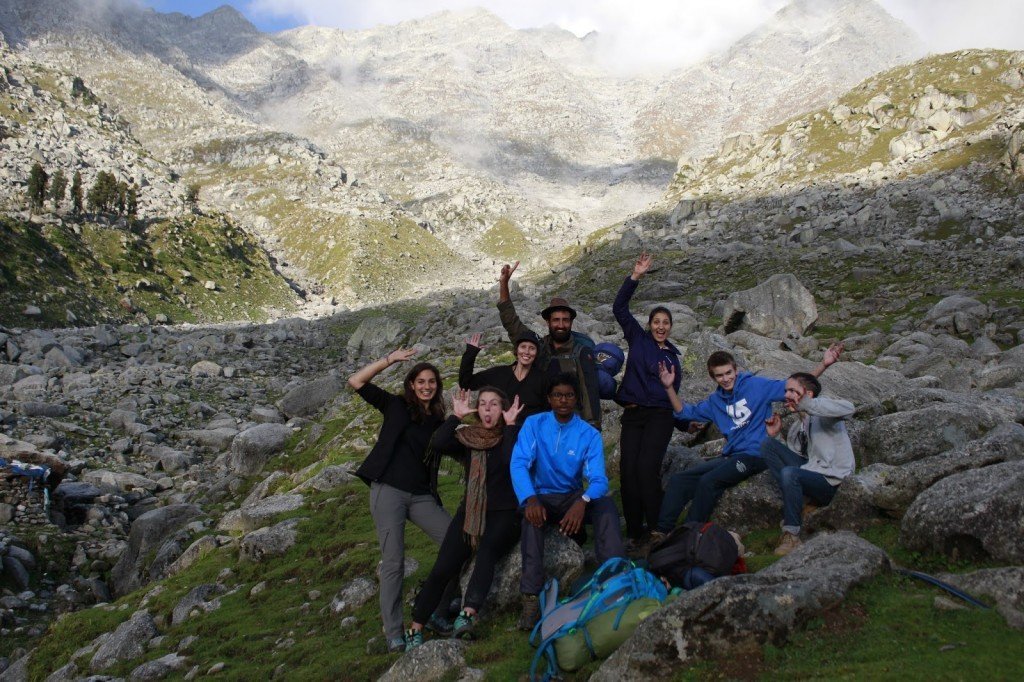