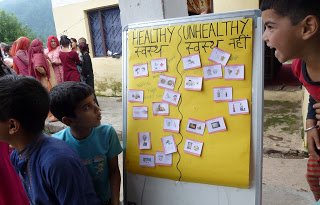 Diseases related to inadequate WaSH – water, sanitation, and hygiene for health are among the world’s most deadly public health problems. Poor hygiene practices, such as not washing hands with soap or unhygienic water storage, are a major contributor to poor health and spread of disease and illness.

Improving hygiene practices requires people to change the way they behave. Traditional approaches focus on using the fear of disease and poor health, but increasingly it is believed that a disgust of faces and a focus on modern toilets are more influential factors.

There are three main issues in WaSH:

There are still millions across developing countries including India that lack access to an improved water source. This means that every day, scores of people often risk their health with poor quality water, paying over the odds, and having to carry water over long distances.

Safe disposal and treatment of human waste is potentially the most pressing development issue in the poor countries, especially rural areas, but improving this sanitation situation is a complex challenge. Improving sanitation requires the involvement of whole communities, but is dependent on individual decisions to invest time and money into keeping neighbourhoods clean. As a lot of money is being spent on developing public schemes and infrastructure, civic organisations need to take lead and look beyond ‘traditional’ development approaches, which view sanitation as a physical asset (a latrine or a toilet) and instead consider sanitation as a service, bringing in entrepreneurial and private sector approaches.

Diseases related to inadequate water, sanitation, and hygiene are among the world’s most deadly public health problems.

We are working to promote awareness and action towards WaSH – Water, Sanitation and Hygiene for Health in rural areas. The initiative includes workshops in schools, community groups, shops and other business establishments, women groups, households etc.