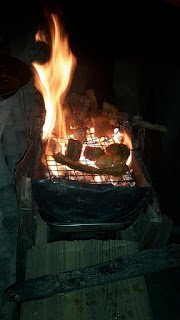 Delicious marinated meat getting ready in “The Barbecue”

6:30. Our guests are already arriving for what is promising to be an epic evening. I started the grill on our small balcony. The wood began to smoke and vanish into the clear sky. It is good to be out after two months of monsoon and the daily curtains of rain. I looked at the embers getting redder and redder. As the evening grow later, the zucchinis and aubergines, the chicken and the pork slowly cooked on the grill. Inside, the fifteen Naddi team members and other EduCARE interns were peeling potatoes, chopping tomatoes and cucumbers. Pineapple and curd mixed and frozen to concoct us an as amazing desert as India can provide. And of course, the finally result was foodgasmic.

Whitney definitely set the bar high for her leaving party. So high, that I can’t see anyone coming close to it any time soon. And so be it. Some records are not meant to be broken. They are to be looked at and admired for the pugnacity and efforts that they require.Tomorrow one of my oldest friends in EduCARE will be gone. My partner in cooking crimes. But she went away on her own terms: grandiose, flamboyant, and most importantly freaking delicious.
Elliott Messeiller – Switzerland
SWASH Coordinator, Naddi