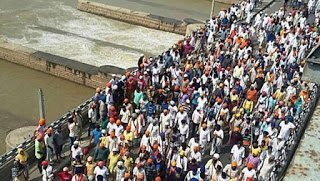 During the whole time I have spent in India or any country, I have never experienced anything like what recently occurred in a rural town of Punjab. It was the biggest and most extreme protest I had ever seen.

It all started because someone had ripped pages out of a holy book. People started protesting about that and while the police was trying to deal with the situation, one officer shot into the crowd and killed two people. The protest got bigger and then a local man went on a food fast for five days in protest and died. Which made the protesting bigger because he died on duty. The day I saw the protest that guy had just died and they were doing rituals and prayers for him. After that, they burnt his body. All roads in the area had been blocked by the protestors, which had caused a great upheaval to all the transportation throughout the state.

But what made the protest very intense was that 90% of the protestors were carrying weapons. Now the weapons weren’t guns or anything but they were swords, axes, huge sticks, spears, etc. I found this very extreme even though I have lived in India before and seen a lot of intense stuff. But later when I thought about it, I realised that if something similar had happened in Australia then maybe people would react in almost the same way. Maybe not with weapons, but if all that had happened in Australia you would have had a very similar response from the public. A holy object was defiled, two people were shot and killed by the police and someone died while doing a food fast in protest. Maybe a situation like that wouldn’t end up so extreme in Australia, but people would still be very angry and I think it would cause almost the same effect as it did in India. It made me think “are we really that different from each other?” and I came to the conclusion that yes we have different cultures, backgrounds, values, morals, religion, etc.; but at the end of the day we are all the same, we are all human, with human emotions and reactions.

I have been coming to India since 2010 and I have never really thought the similarities between all humans in this way until this incident. I think I always knew, but seeing this situation really made it clear to me. We may look different, speak different languages and have different life styles, but we are all humans and most people would react the same no matter where they are in the world if something like that had happened in their country.