Garmi Garmi, dealing with the heat of Punjab 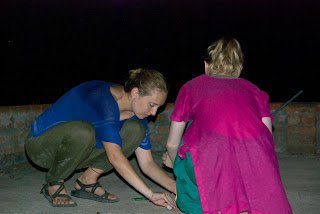 Garmi Garmi, dealing with the heat of Punjab

Before I arrived in India at the beginning of June 2015, the news at home was displaying stories on a near daily basis about the insane heat waves across India. The south was experiencing temperatures nearing 50’C, Delhi was a toasty 44’C (112’F for my fellow Americans), countless photos of people guzzling water crossed my BBC news app. My friends and family loved to alert me of these temperatures, but I assured them I wasn’t going to places mentioned in the news, and thus should be ‘chill’. I was right….sort of.

While Punjab was never mentioned in the history-making heat wave, that did not mean the Punjabis were relaxing in balmier weather. Much of my experience with Educare, and thus living in rural India, has centered on the unrelenting heat. I believe on one of my first days I (naively) asked if the house I would be living in would have hot water. The answer, technically, was no. However when your black water tank sits on the roof baking in 40’ your water really will be hot, whether you like it or not. Living in Janauri I quickly had to be accustomed to stepping out of a shower and not being able to differentiate between what were water droplets from my freshly washed hair, or new beads of sweat already starting to do away with my recent cleaning. It’s a never-ending, and sometimes futile, battle.

You learn to embrace this heat though. Everyone’s affected by it and brings you all together at a basic human level. One of the first Hindi/Punjabi words I learned was garmi (hot), and it is the perfect way to break the silence when meeting people. If one is ever at a loss for their Hindi (which happens in every conversation I’ve entered in India), they simply feign an exhausted face, fan themselves with their hand and mumble “garmi, garmi, garmi”. It is a perfect way to connect with whoever is in the room, and most likely they will respond with the same motion, and you both will chuckle.

I won’t lie, aside from vanity reasons; this heat is difficult to work with. Children that should normally be running and screaming with excitement lay exhausted in the shade. Getting “rambunctious kids” excited for after school activities is often one of our biggest challenges in Punjab. Community engagement is difficult when the majority of people in the villages are sitting inside with their fans on. But we make it work.

I don’t mean to whine about the heat because in fact, life thrives here. Everyone still adds just as many hot spices to their daal (well, maybe not every intern), everyone still drinks their daily hot chai, and we still manage to play games of tag in the migrant camp that leave us dripping in that Punjabi sweat. If anything, the heat just adds a little more flavor to the experience! But that doesn’t mean I’m not excited for that autumn chill!

Madeline lighting up fireworks on the 4th of July