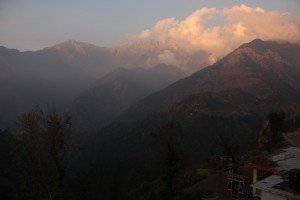 Himachal Pradesh is a state in Northern India, located in the Western Himalayas. It is consisted of 12 districts with Shimla being the state capital. Mountainous and forested, Himachal Pradesh is famous for its natural beauty. People mostly rely on tourism and agriculture for income. With the total population of around 7 million people, Himachal Pradesh has one of the highest proportion of Hindu population of 95.45%. (NGO, Internship, Himachal Pradesh, India)
Dharamsala is the closest district headquarters to our centres in Naddi and Rait.  It is one of India’s most popular hill stations and is home to His Holiness the XI Dalai Lama, so it has been a haven for both Tibetan refugees and foreign Buddhists since the 1960s. Today, its unique culture and wonderful views attract tens of thousands of foreign and local tourists each year.

The villages surround Dharamashala are nestled into the Himalayan foothills, and are particularly tranquil and peaceful. There are a number of pleasant and safe forest walks which connect to the nearby towns, villages, rivers and meditation centres, and the views from the village are spectacular. In these hills of Himachal Pradesh, there is still traditional small and subsistence farming and people living in stone and mud houses.

EduCARE currently has 2 centers in Dharamsala city in Kangra district of Himachal Pradesh: one in Naddi and one in Rait.

Naddi is a quaint village located in Himachal Pradesh within the district of Kangra. It is situated in the Himalaya’s, about 7000 feet above sea level. It is 3km from Mcleod Ganj, and the home of His Holiness the Dalai Lama.

When walking in Naddi, one can find many new developed businesses such as hotels and restaurants that receive many visitors and tourists. Although Naddi is becoming more and more developed over time, it firmly keeps its roots of traditional Gaddi culture and ways of living. Some examples of this can be seen as the mud huts with slate roofs, families storing dry hay for different usages, and the locals going to each others’ homes to drink chai. The local population is very amiable, accommodating, and always willing to help others.

In the surrounding area, there are a few tourist attractions such as Dal Lake. There is renowned festival during September that attracts visitors to come and swim in the holy lake.

The weather warm and pleasant during summers, whilst cool in the evenings. During the monsoon season there is heavy tropical rain, and in the winter it is quite cold with periods of wind and snow.

EduCARE has been operating for 3 years in Naddi village with a wide range of projects. We primarily work with women on social and economical topics. The projects for Women’s Empowerment include English classes, Girls Club, Young Women’s Association and Microfinance.

We have many ongoing MicroFinance projects in Naddi.  Our homestays project includes 7-8 homestays which welcome tourists or the new interns during their induction week. We also operate a local community REstore which is the Rural Economy store which sells fruit juice and handicrafts made by the women in the community.  These women also collect monthly funds as part of the Self Help Group which is used to give interest free loans in case of emergency or need.   The ongoing micro finance projects in Naddi include the chicken coop, creating health insurance for some of the local women, and giving training to the first female driver of the community.

Our health projects include workshops and education, yoga classes, health camps and the creating of a Health Awareness and Assistance Centre.  Our education projects include ASP (After school program) and fun club where we teach children about global awareness and topics related to health, the environment and help them develop a more open minded view of the world.

Our environment projects focus on waste management (SWASH), sanitation, air pollution and reforestation. The SWASH project has introduced a waste management system in the local village shops to discourage the burning of trash or littering in the river.  We run various sanitation workshops with the local community households.  We encourage households to use more energy efficient and green cooking methods that are better for their respiratory health than biomass stoves.   Our forestry project is reforesting areas that have been felled for fuel or fodder, in order to protect the local biodiversity and prevent landslides.   Similarly, we work with the local community to develop organic kitchen gardens to help improve their nutrition and health and improve the soil quality.

Rait is a small village located within the Kangra Valley of the Himachal Pradesh. A 45 minute bus ride from Dharamshala, Rait is found within the plains of the river basin. The village offers panoramic views of the Himalayas and is surrounded by wide, open fields, with varying hues of yellow and green, where local farmers harvest wheat in the summer and rice in the winter. The main road intersects the village and is decorated with fruit and veg. stands, tea stalls, fabric shops, general stores, mechanics, and a busy bus stand.

According to the 2011 Census, Rait has a population of 1826, which is comprised of about 400 households, each housing about 4-6 people. More than half of the population is female, and a third of the village’s population is working. Most village members work as local shopkeepers, bus drivers, messin (construction workers), or are employed in the nearby city of Kangra. The village’s literacy rate is close to 90%, and 119 families are listed as below the poverty line. The strategic location of the Rait Centre has much to do with the close proximity of the Block Development Office, with whom; interns hope to partner with for future projects.

The Rait Centre of EduCARE India has been open since April 2014. Previous interns worked in the neighboring communities of Rajhol, Maiti, and Chambi, and in 2015, interns began community engagement in Rait. The relationships built throughout this time, aided interns in identifying key community members, with whom, certain projects began. Current project focal points within the Rait Centre include Women’s Empowerment, Microfinance, Marginalized Community Empowerment, Environmental Health, and Sustainable Living. Most projects are focused within Lower Rait (the Southeastern region, which happens to be the wealthier side of the village). Because need isn’t as prominent in this area, interns hope to expand the scope of the current projects within the next quarter, encouraging more community participation, assessing need, and using EduCARE India projects to meet the needs of community members.

The close bond of interns and the landlords’ daughter-in-law, Sarita, led to the formation of the Young Women’s Association.  The goal of the Young Women’s Association is to create a safe space for women to gather and engage in public life. Activities such as English lessons, a health camp with a doctor from a local private hospital, and beginning monthly meetings are goals interns hope to accomplish within the next quarter.

Since March, women’s empowerment interns have facilitated activities with the local adolescent girls. Girls’ Club meetings take place every Sunday at 5pm, with an attendance ranging from four to six girls. Interns use games to help improve English, which was a goal for many of the girls. Arts and crafts are used to encourage self-expression, as hands-on activities aid in introducing deeper topics of discussion.

Microfinance and the YWA work closely together, as project managers engage the same women. After surveying the economic interests of these women, the business ventures many were interested in included learning and improving their sewing skills, at-home mushroom cultivation, a chicken coop, and starting a beauty parlor. The aim of Microfinance is the economic empowerment of the marginalized and below the poverty line households.

After School Program (ASP) is the Rait Centre’s oldest project. All interns work together in Chambi, practicing math, teaching Hindi and English to the children. ASP takes place on Mondays, Wednesdays, and Saturdays from 3:30-5pm. Because the migrants often make money by collecting trash, Solid Waste Management and Microfinance is a near-future project idea. Women’s empowerment and health are other projects interns would like to integrate within the migrant camp.

Because there is no waste management system for the village, the long-term goal is to raise environmental health awareness and create a system for Rait. Currently, tasks for the SWASH project manager has involved identifying local disposal sites, collecting and monitoring the waste produced by shopkeepers, and lastly, using various methods of sorting the accumulated waste.

Within the intern house, interns experiment with different ways to reduce, reuse, recycle, and repurpose. There are currently five sustainable features within the house; in-house projects include the compost, kitchen garden, waste management system, water conservation and reuse, and the use of eco-friendly products. The goal is to experiment and create new sustainable practices, and by using the intern house, model sustainable living for the village.

Our SUDHAAR SEVA initiative for sustainable urban development and humanitarian assistance has started accepting visiting volunteers and interns since Jan 2019 onwards at Dharamsala.