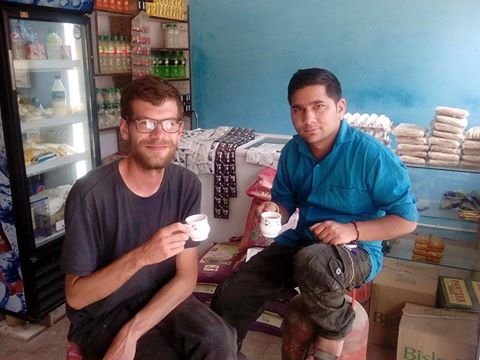 This is a love story. A love story that started on a cold February day in Naddi.

First minutes of my internship. I just arrived in the place. My first time in India, and everything is new and exciting. The weather is grey and cloudy, but who cares I am in my new home for the next seven months. There is something familiar in the white peaks in can see between the clouds. Even the air reminds me of my beloved Swiss mountains.

The bumpy road and the trash along the street are not familiar, though. Good, I am here for solid waste management. And there is definitely some work to do.

I try to decide if Naddi is colder than the twenty centimetres of Swiss snow that I just left or not. It is not, but still quite chilly, even more for India. What I didn’t took into account is that there is no such thing as house isolation, nor central heating. Paper fin windows, and freezing air blowing right under your nose in your bedroom. Add buckets of water falling on your head every single day for a month, and you have the perfect combination to be eternally cold.

At Naddi’s main square. The name is quite strange: it is the only square of the village. And, it is shaped like a bodybuilder banana buffed by hormones. Not main, but single. Not square, but banana.

Then, one of my fellow intern ask me in his broken English this very simple question that will change the rest of my stay here:

Eventually, someone would have asked it, of course. I might have taken just a few minutes more. Maybe a couple of days. Still, I had set foot in my new home for a couple of minutes, and there it is, the life-changing question. Drinking chai in Naddi’s main square. It is now a daily habit. To the point that when I don’t come one day without previous notice, a shopkeeper will call me, asking what’s going on.

I heard of this beverage before my coming, of course. It is quite trendy in some fancy coffee shops at the moment. Some kind of tea with a lot of milk, some unknown, exotic spices. And sugar. Lot of it. And this is where western chai is failing: the sugar to liquid ratio is way too low. By at least a couple of spoons per cups.

The best is when the top part of your chai cools off and a skin forms itself on top of this small piece of paradise. Then, you can drink it in one good sip can. Or just eat it. As you wish. I am a sipper, but I won’t judge you. Under the first – and quite dominant , let’s be honest – sugary taste, you will find a pinch of spices. That what’s make a good chai. No spices and you have been fooled. This is no chai. It is tea. And tea is boring.

Chai comes served in small cups. So small, that by the time they are finished, you just want another one. That’s where the evilness of it is. Those tiny little things can never fill my insatiable appetite for chai. So, I have to keep drinking over and over.

I just didn’t realised when I had my first cup at Omi’s Cafe on this cold morning that it would become part of my daily life in India. That I would drink so many of them, that I could not even count if I wanted to. You don’t ask yourself how many cup of water you drank in your life. Well, don’t ask me how many chai I had. You will embarrass me and yourself. Me, because you will pinpoint my addiction. And you because, obviously, you are not addicted yet if you ask this silly question.

No chai before noon is usually the sign of a bad day. Four is the average, and eight is definitely the tipping point. Where my stomach can’t handle all the sugar and milk anymore. And this line is often crossed.

That’s one of the many reason why I will Indian trains. You don’t have to get up to have your chai. Some random man will wake you up by yelling at six in the morning the sacred words: “Chai! Chaii! Chaii!” in this very particular singing voice that street sellers have all over the world.

The revelation came just a few days later, during my first day of work on the field. Olivia, my lactose-intolerant colleague, and I went to the shopkeepers of Naddi to have our first trash talk.

First shop, first chai. We continued to the second one. Same deal, another chai. While we get out, I could see Olivia look at the main square with despair: there is still four shops to visit. And then we have to go to the rest of the main street. She knew that her stomach will not be able to handle all this milk, and she was too polite to refuse. And even when she tried, the locals didn’t care at all.

Good thing that I love it. It is actually part of my job. I spend most of my days bounding with shopkeepers, trying to build a relationship, and gain their trust. And they happen to drink a lot of chai. And refusing would be impolite, right? Drinking chai is not an option in this line of work.

A chai on the side in the main square, and I had the most important conversations for my project. Not because of the beverage on itself, of course. But because it meant spending at least ten good minutes of casual talking with someone. And, when you spend enough time, asking the right questions, people will cut the crap at some point, and tell you the real deal.

Recently, I have been asked what qualities should have the person who will replace me in a few months. Loving chai is the first of them. And maybe the only one. The rest will follow.