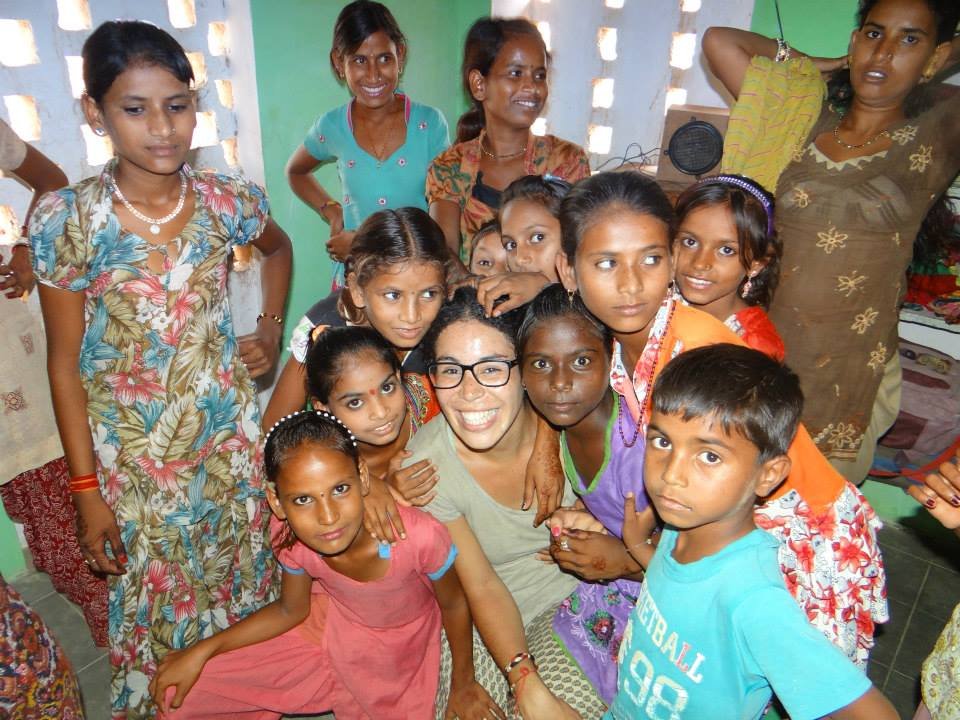 My intern flatmate Lea and I sat upon the marble wall fencing in the Birla Mandir from its gorgeously kept gardens below, looking out at the busy streets of Jaipur. Nightfall in big cities is always such a rush; I’ve almost forgotten the feeling after being in the village for so long. The streets are always jammed with auto rickshaws, cars, scooters, bikes and young lovers and friends setting out to drink chai at nearby, trendy tea spots or local hangouts just outside the downtown core. As I looked out, my ears absorbed all the movement and sound around me. No matter where you are in India, you can always hear music playing whether it’s from a temple, a tea-stall’s radio, a car, a cell phone, a pedestrian humming the latest Bollywood tune; the entire country eats, breathes and sleeps music. We sat chatting about religion, spirituality and reminisced on our weekend in Jaipur and Sawai Madhopur, where we visited the Ranthambore National Park and watched a tiger casually devour a large deer.

Since I arrived in January, I have been compiling a list of all the very unique “things” that truly describe India. Without noticing it, the list very quickly turned more into a joke with things including “you can start a fire anywhere”, or “you can build your house anywhere” and “India, where 10 minutes is an hour”. Everyday I experience a mix of all these little details that I keep in my teal blue notebook and sometimes when I’m on a bus or in a rickshaw, I take a look at the list and add silly things that come to mind. After being in the train station for over six hours yesterday, waiting for a train home to Bikaner that was five and a half hours late, I compiled five “things” that I truly find hilarious and what make me love this beautiful and over 40-degree country so much.

So , here is a sneak peak to Jazzmine’s “Only in India” collection:

1. Sleeping wherever, whenever, free of charge
I’m pretty famous for this at Hotel Pearl Palace in Jaipur. I’ve never once stayed a night in the beautiful, exotic and expensive hotel but am expected most Fridays to show up for a delicious breakfast of scrambled eggs on brown, whole wheat toast, yogurt with bananas and honey, and non-Nescafe coffee. They don’t even greet me anymore when I show up after the 4:30am train arrives at Jaipur Junction. The sleeping receptionist simply peeps his eyes out from under the sheet he uses to mummify his body while sleeping on the floor, then I proceed upstairs to the lounge where I starfish onto one of their couches and pass out until 9am. This isn’t just Jaipur specific though, a whole group of 11 of us did this once in Jaisalmer, sleeping on the rooftop of the Mystic Jaisalmer hotel, not paying a single penny for the few hours nap we had after arriving via bus in the early AM. You’ll also find me sleeping in the Harasar Haveli dining room in Bikaner from 5am to 7am on Sunday mornings when I return home from a weekend away, awaiting their delicious breakfast buffet to open and for the local buses to start running to Gajner. I’ll never understand why this is acceptable and why Indians feel it is totally okay to sleep wherever you want (i.e. bus shelters, train station floors, on boxes outside of shops, etc.) but hey, works for me!

2. Odd Job Men
You really don’t need any type of sales skills to sell something in India. There is also no strategy to the business. You will find rows and rows of men with carts all selling the same thing on the same street and somehow they are all making a living. I’ll never understand it. Even in Gajner, we have three stalls that sell the same fruits and vegetables everyday and they are all right next to one another. Everything is the same price and the same quality. But in the city, men are really creative about what they sell to help with competition, and these are what I call the “Odd Job Men”. My favourite is the “Scale Man” who sits on the side of the road with a scale. To partake in his services, you simply just stand on the scale, view your current weight (sometimes he’ll verbally tell you) then pay the man. And my all-time favorite? The “Ear Cleaner”, who usually walks the trains with a bag of Q-tips and for a small fee will provide you with the most satisfying feeling of a wax-free ear.

3. Bargaining with Style
You really need to be creative when it comes to bargaining, whether it’s for a rickshaw ride or bangles. When it comes to rickshaw rides, sometimes I’ll make a local set the price for me then once it’s agreed upon, I’ll jump out from behind some bushes and get into the rickshaw instead of the local. This seriously drives the driver (ha!) insane because they know how easy it is to fool foreigners into paying crazy prices to go as little as two kilometres. My other go to is by serenading the driver with my guitar and singing, “if you don’t give me the ride for 50 rupees, I’ll never stop singing this sonnngggggg”. This was really only done with Ali since no one is ridiculous enough to do this with me again. For material items and accessories, I usually use their exaggerated compliments against them to get a better deal “but Ji, I really am Shakira”, or start a full on war between shop owners, “I pay 100 rupees or I buy from the next shop” (they usually chase after me and agree to my price before I’m even out the door). It is slightly evil but wouldn’t you be annoyed too if people were constantly after your money and giving you unfair deals just because you have white skin?

4. Candy or Coins?
Tellers rarely have change and they hate to break any bill over 50 rupees. This is a serious issue for anyone who has just left an ATM since it only withdraws your money in 500 and 1000 notes. In India, there are 5, 10, 20, 50, 100, 500 and 1000 rupee notes and coins of 1,2,5 and 10 rupees, but these are extremely rare. So rare that if they can’t give you change fewer than 10 rupees, simply because they have no coins, they will give you candies instead! One candy is equal to one rupee. If you have 10 candies, you can trade them in for a 10-rupee bill, and sometimes if you’re lucky, they will give you a 5-Star (an Indian chocolate bar made from milk chocolate and caramel). It’s a really good day if you get a 5-Star.

5. Anything you want, you got it!
Indians aim to please and they don’t like to say no or take no for an answer. I’m starting to give in to it and have grown quite used to it now. For example, I am a lot more aware of my time when visiting a friend in the village, allotting myself an hour or so for the visit in case they offer me too many things. I also always prepare my stomach since they will usually force feed me a huge plate of chapati, vegetables and curd, followed by a full cup of sugary chai. If you ask an Indian any type of question, either directions or if they have the colour scarf you are looking for, whether they have it or not, they will find it for you. Even if it requires running two-kilometres down the road to find what you want, buy it and bring it back to re-sell it to you. They’ll even give you wrong directions if they don’t have the right answer for you just so they can give you an answer. Their first motive is to help, always, no matter if they succeed or not.

This is my India. It’s chaotic, loud, silly, accommodating and no other country will match its hospitality, ever.