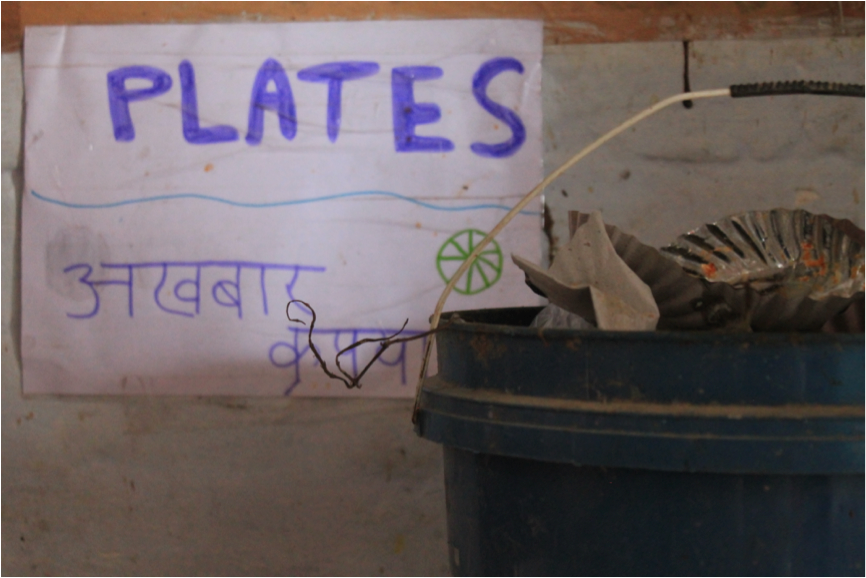 While working on my project at EduCARE, I’ve found that many days are emotionally draining and challenging due to my interactions with the local culture. Yesterday was definitely no exception.

I’m based in Gajner, a little village in Rajasthan, and my project is to implement a waste management system. I only started two months ago, but I’ve managed to set up a system in the Intern house and Manoj’s shop, a neighborhood restaurant.

After I’d implemented a sorting system in the intern house and Manoj’s shop the next step was to search for and contact a ‘trash picker’ – someone that could collect trash and sell it. Fortunately, I had someone in mind. His name is Mulcham and he lives with his wife and 5 children in Indira Colony, a marginalized community here in Gajner. His kids are involved in the After School Program (ASP).

Yesterday morning I decided to go see Mulcham with Pradeep, an Indian friend who speaks English and helps us a lot with our projects. The plan was simple: go to his house and arrange a time where he could come and collect our waste. In my head I hoped that we could arrange a meeting for the following week. But when Pradeep explained the plan, Mulcham said that he could come right now with his bike. I was really excited and happy to have it all happening so fast. I took a chai with his family and then returned home to wait.

After 3 hours he was still not here. I began to have different feelings. Indeed I actually felt lost. Mulcham had appeared so excited and honest and he said he would come right away. I also felt angry because I wanted to trust him. I felt frustrated because it was like I could try everything, but it will never work. This project was hopeless, I thought.

At this point, Jazzmine and Lachlan, my fellow interns, saw my trouble and challenged me, telling me that I had to make it happen. I had to do something, try harder. It was difficult to hear, I just wanted to stop my work and let it go. But it was also helpful and necessary.

So I finally went to see Pradeep and asked him to come with me to speak one more time to Mulcham and have him come, even if we have to put him on Pradeep’s motorbike. Pradeep was surprised because he also thought that Mulcham was honest. Pradeep agreed to help me again.

Fortunately on our way to Mulcham’s house we met him on his bike; he was finally coming. He came to the house, saw our waste and took all our bags, even if it was not recyclable.

It was a huge victory for me: I found someone to get rid of all our waste. He will sell what he can in Bikaner and throw the remainder in the dump.We also showed him Manoj’s shop’s garbage and he agreed to come the following day to get rid of this rubbish too.We made an appointment for the following morning – this morning!

I felt so relieved, my project jumped forward and Mulcham was able to get rid of all the waste. He is a vital link in project. Of course I still have a lot of questions: what really happened to the non-recyclable waste; how many times can he come to collect the waste?

But I decided that it would be easier to ask him these questions today when he comes to collect Manoj’s waste.

If Mulcham is well involved and motivated, we will be able to expand the project to other shops. All these ideas made me really happy!

But the funny thing is, as I write this blog post, I’m still waiting for Mulcham to return to collect Manoj’s waste!

However, this time I’m not too worried. He came once, I’m sure he’ll come again. I’ve learnt the importance of being patient and persistent in India.  And that time is indeed circular and stretchable.  What I used to think was dishonesty, I now understand is just a totally different way of seeing time.  Its all about perspective.

So, I guess this is how it works in India.

Its India’s mentality: beautiful and messy.