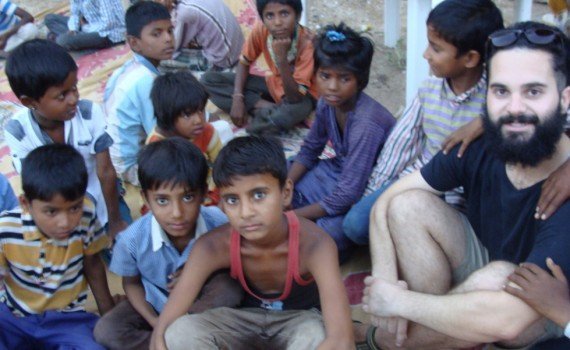 This past week, the Bikaner cluster had to say a tearful goodbye to a wonderful intern who has been staying with us over the past four months, Lachlan Alexander. A spunky Australian with a wonderful personality, great beard, mind full of creative ideas and wisdom and a huge heart. While Lachlan has been here, he has been working on the MPAT survey (a survey created by IFAD) helping our cluster measure the levels of poverty in the migrant community of Gajner, Indra Colony, to help better our on-going projects taking place within the community and also to help us learn what new programs and projects could, and would, benefit the community. His research and work with the survey has led him to building strong relationships and adorable friendships with many of the families in the colony, specifically the young boys living there.

There are more than 250 children living in Indra Colony and somehow Lachlan found a way to meet almost all of them, and remember their names! This has been extremely beneficial for our after-school program, ASP, which runs in Indra Colony on Wednesday’s around five o’clock in the afternoon. During this time, all the interns in the Gajner center engage children of the migrant community to play games such as cricket, soccer or frisbee. Our overall goal with ASP is to integrate children from all the colonies of Gajner, no matter what class, caste, religion and gender, and engage them in fun and innocent activities where they can all interact with one another. And so far, we’ve been extremely successful in doing so.

Lachlan’s last day with the cluster was May 14th and as a gift to the community, he decided to throw a huge bash and invite all the families from Indra Colony and those he’s been working with from all around Gajner. Together we would spend one last evening dancing and laughing in the vacant lot next to the intern house and enjoy a huge feast cooked by our favorite Chef, Manoj. Although, from experience, we know when we plan something it usually doesn’t go as smoothly as we hope but somehow, although the day was extremely chaotic, it worked out to be the most perfect send off for Lachlan. Here’s how it all started:

Wednesday morning, we all awoke early to welcome our new intern, Laure, and Michelle from the human resources department who was coming to meet with all us interns and learn more about our projects and HR needs. While Mathilde and I attended the Young Women Association’s, YWA’s, morning English and Hindi class, Lea and Lachlan welcomed Laure and Michelle after a long night aboard a train from Pathankot (which was five hours late…as usual). Unfortunately YWA was cut short that morning due to an angry dog biting into Jazzmine’s flesh while accompanying a young one into her home. While Mathilde and Jazzmine rushed off for emergency rabies shots at the hospital, Lachlan and Michelle toured the community gathering those who were part of Lachlan’s survey project to head over to the ViKAS center, our office, for a presentation of the survey results.

Manoj began preparing the feast in the late afternoon, with the help of Mathilde and Lea, while the rest of us participated in the afternoon’s ASP activities in Indra. Now, the first part of ASP is to round up the kids (which can sometimes take an hour in itself). The colony is a giant square measured at about three kilometers in length and width. There are three separate paths we usually take to enter the community, with rows and rows of houses on each with tons of children to gather. On average there are about 3 – 4 children per home therefore making the “round up” the most challenging part of Wednesday’s ASP. We all split up gathering as many children as we could and with luck on our side, we were able to bring out a crowd of about 30. Lachlan led a cricket match with some of the boys, Michelle led a Frisbee game and Laure and I led a dance-a-thon/tickle fest with the little ones, which turned into an epic game of Simon-Says; a game where before each action you call out, you say “Simon says”. The children are to follow suit for every action unless you make a command without saying “Simon says”. If they follow the action when you haven’t said, “Simon says” they are out. Unfortunately this was a little hard to explain in broken Hindi so it just turned into the “Do Everything that Jazzmine says” game, which is exactly how we managed to get all 30 kids from Indra Colony to walk, run and dance all the way to our home at the other end of Gajner, about a 3-kilometer walk in the blistering heat.

As we approached the house, while the kids chanted “Lachy! Lachy!” (their adorable nickname for Lachlan) I started to think “man, I’m thirsty…and so are these thirty kids!” I sat the kids down outside our house and grabbed a small metal jug from inside our kitchen. Lining up the children, I poured water into their cupped hands as they raised them up to their lips and sucked the water spilling into their palms before it all dripped through the cracks of their fingers. After about five trips to the kitchen tap and back outside, I yelled over to Manoj “Manoj-ji, khana kitne badji hai?” Manoj, what time is food? “One hour,” he responded. Uh oh! Thirty kids verses four interns for another hour…what to do?! I busted out the Bollywood tunes. The girls immediately broke out into dance while Lachlan led the boys to the Panchayat field to start another cricket match. As more kids joined us, we moved into the back area of Manoj’s shop, spread out some blankets on the ground and opened a few boxes of puzzles. Michelle, Laure and I spent a whole hour saying “bahut accha!” “very good!” to every child that found two pieces that connected. It was quite hilarious. When food was finally ready, Manoj helped bring out the dining table from our house and a few benches from inside his shop. While Lachlan, Pradeep, a friend of ours from Gajner, and I coordinated where all the children would sit, grouping them in sets of 3, 4 and 5, the rest of the interns helped bring out huge platters of chana, dal, chawal, paneer, chapatti and papadum for each group of children. The children literally feasted while music played and laughter and giggles filled the air. The integration of the children was a huge success for us as a cluster as well, having such a large range of kids from different social and religious backgrounds come and eat, play and laugh together all due to the relationships built between them and the intern team, especially “Lachy”. We couldn’t help but smile while we ran around replenishing plates, patiently handing out sweets to thousands of hands reaching out at us and pouring water on sticky, gooey hands and little faces as they said their goodbyes and headed home to sleep off all the excitement.

After another couple of hours of hosting more families, Lachlan opening gifts from the community and saying goodbyes, we collapsed into our chairs around the dining table laughing, smiling and reminiscing about how truly chaotic but incredible the day had been. We hadn’t expected everything to work out the way we wanted too and I think we wouldn’t have been prepared to do so even if we had. But somehow, seeing the smiles on those kid’s faces, and Lachlan’s, helped us push through a very sweaty day of cooking, dancing, running and cleaning. On that day, we truly learned how to cope with chaos. We loved it and we succeeded.

“Do you work this hard everyday?” – Michelle Fujisaki