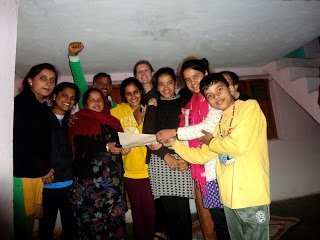 After 2 months of intense nutrition work with the community, the cooking competition in Chenni successfully finished one part of the project, opening the door for more workshops and raising of awareness amongst the girls and women.

Everything started months ago when, after one more dinner with a family, I could not walk home because of all the rice I was fed. I decided that it was time to start a nutrition project. After some planning and discussions with Mr. B, we thought it would be good to first increase our knowledge about community’s food habits and then have an event.

In September I started to hand out one nutrition file per family in Chenni. For 7 days, the girls and women had to write down everything that they ate during the day, indicate in which quantity, if there were salt or spices, and if they thought it was healthy or unhealthy food. As this required a lot of checking up and encouragements, those files were given to 7 families over the month of september. 6 files were completed more or less perfectly – quite a success! In the meantime, I went to have dinner with all the families involved, a good way to spend time with the families, talk about nutrition but also observe the dinner habits.

After that, everything was ready for the big finale, the nutrition event! During one Young Women Association meeting, I asked the women the day they would be available for the event. October being an intense month for wedding, we were able to agree on Tuesday 27th of October and thus squizzed the event between 2 weddings. One problem was left though: how to organise and cater for all the families and the interns ??? The cooking competition was the only way and probably the best way to engage and motivate everyone! The rest was just a matter of organisation. Each family received 2 vegetables to cook and was provided with labour force aka 3 EduCARE interns, hungry and determined to provide the best help to the family!

On the D-day, I spend the day preparing the dessert and solving last minute issues with the help of Tomasso, Louise and Johnatan. Baking cookies without oven? Check ! Cutting a mountain of pineapple? Check (thank you Tomasso)! At 4 pm, eveything was ready… Chenni here we come!

After gathering most of the girls, Madhu and I did a little workshop where we were able to provide tips on nutrition and give some feedback from the nutrition files. Progressively, no less than 15 other interns arrived, ready to chop, boil, cook and have fun! 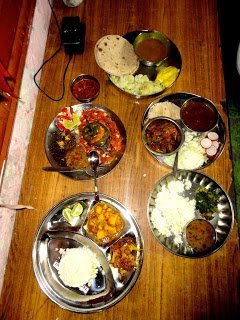 5pm ish, the competition started! While everyone was sweating over their dish (figure of speech as the temperature in our mountains has dramatically dropped), Priya, Boby and I were taking pictures. At 7 ish, everyone was enjoying a well deserved meal. 7:45, the judges were gathered, the thali plates were displayed on the judges table. No less than 6 judges – Bindu, Abu, Savita, Priya, Boby and I – had the responsability to decide who should win the first ever cooking competition. More than 25 people were squeezed (we were cold) and were intensely observing the judges nimbling on all the amazing food. 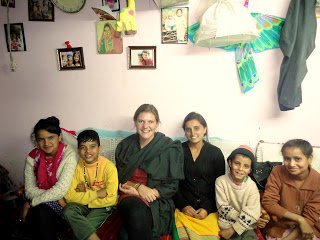 The judges waiting to taste the food!

While everyone was finally allowed to taste each others food, the judges were debating next door on who should win. Despite the difficult task, one team was agreed upon.  After gathering everyone again, Priya announced officially that Sunayna, Kanta, Kuldeep, Anamika, Tulsi and Anesa were the winners. The price – paneer, chocolate and a little cookbook – was given, along with a diploma.

To thank everyone for their participation and as in the end everyone won (yay!), we all gathered around a dessert before shivering our way back home!
Harmonie Bucher – France
Health Coordinator, Naddi (Himachal Pradesh)