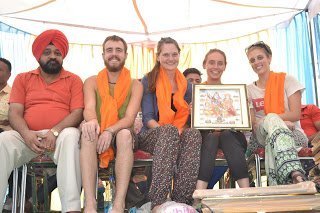 If there is one thing to know about India, it’s that they love a good festival and celebrating in style. Luckily, we got to experience every first hand and on a quite a personal level. We started small and by the second day, it turned into one of the most intriguing events in my life so far…

We spent the first night (Saturday), at a small celebration in Janauri, there was some delicious free food, a makeshift temple near the bus stand, and some lovely traditional Punjabi music. It was a nice and low-key event to transition us into what was in store for us Sunday.

Earlier in the week, the councilor from a nearby (and much bigger) town came to invite us to his festival in Hariana. We happily accepted and went over in the afternoon for some more food and music. I think we underestimated our invitation but quite quickly it was brought to out attention we were “esteemed guests” and presented with a picture of some Hindu Gods, which we are planning to hang in the office.

Immediately after that, everyone around us was preparing for the parade-men in costumes, drum players, cars with stereo systems surrounded us. Much to our surprise, Amelie and myself were asked to ride camels in the parade and wave to the crowds. There were firecrackers and elephants in front of us and the whole experience was loud, colourful and incredibly and uniquely, India. Three hours later we were finally off on camels and own our way home to get back to work until the Kabaddi games on Friday. 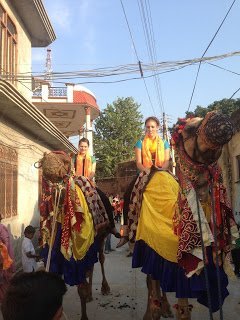 Amelie and Breanne riding camels in the streets of Hariana

The Councilor invited us to come to Hariana again to see a Kabaddi Game with him on 23rd of this month. Once we reached, he got us seats on the stage next to the other counselors from where we had a good view on the Kabaddi field. For most of us it was the first Kabaddi game so it was really interesting to see it live and from a stage as VIP guests. But what was even more interesting was the show inbetween the Kabaddi games. Once, three men tried to fit in a ring that, to us, already seemed too small for two men, and another time they let five men aged over 60 try to catch a chicken. As interesting it was to see all these bizarre shows and talents unfold in front of us, you can’t help fell uncomfortable as you realize these old men are chasing a chicken for a money prize and are quite poor members of the community. To everyone on the stage with us, they roared with laughter as the men tried and failed to catch the bird, falling face first in the sand along the way. It was a good example of the cultural shocks we sometime face in India and how we have to learn to adapt to the situation without being offensive. While watching the game, the counselor introduced us multiple times to the crowd and we got served several snacks throughout the afternoon. And again, we got a painting and orange scarves as a gift for the guests of honour, which will keep reminding us of this interesting part of Indian culture we could experience that day. 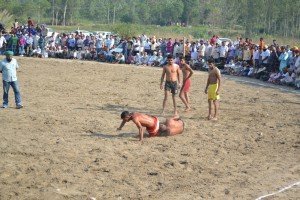